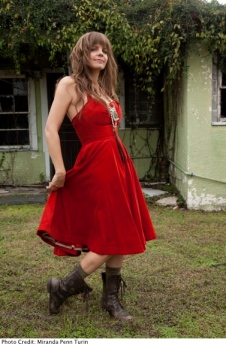 While multi-instrumentalist, Theresa Andersson, was born in Sweden, the land of amazing pop artists, you can hear how much her current home, New Orleans, has gotten into her musical blood. “What Comes Next“, the first single from her upcoming album, Street Parade, starts with a drumming march and turns into a lovely mixture of folk, soul and indie-pop.

Look out for Street Parade to be released April 24th and if you’re in New Orleans for Mardi Gras, be on the lookout for the singer to make an enormous parade debut. Not only will she be performing with Krewe of Muses but she’s also working with Arthur Mintz, the creator of “the award-winning theater version of Fantastic Mr. Fox,” and will be led by a puppet-driven float with a forty-piece band backing her up.

1 thought on “Theresa Andersson “What Comes Next” (mp3)”